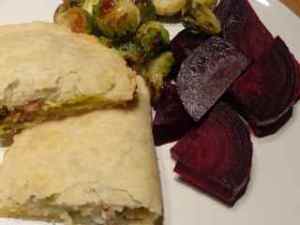 Dinner tonight  – bacon turnovers with beetroot and roasted brussels sprouts – was delicious and so satisfying I could only manage one course. The pastry was simple – flour, fat and water – and the filling easy – fried bacon, leeks and mashed potato. Roll the pastry into a circle, put the filling in the centre, fold the pastry over, seal the edges, then put in a hot oven for 30 minutes along with the sprouts which were roasted in the left over bacon fat. This would be a great – and incredibly cheap – recipe for leftovers of any kind.

On to more of Anne’s memories of being a child evacuee during the war.

Were there many evacuees in Kippen? The ‘under -11s’ from Hyndland School were all there or in other villages around Balfron. I was lucky and made two ‘best friends’ – one a village girl, and the other from Hyndland.

How often did you go back to Glasgow? I don’t remember clearly, but I think not often, especially not at the start or until more raids seemed unlikely. It was more a case of Glasgow family coming to see us than our going there.  John (Anne’s brother)  came during his leaves and he and I explored the countryside around – memories which are precious to me.

How long did the journey take to Glasgow?  Did you travel by bus or train? By bus, which we picked up at St George’s Cross at the east end of Great Western Road. It took a little over two hours as far as I remember, winding through village pick-up stops – like a puppy-dog and lamp-posts. In winter it was a dreary run because of the dark, and the dim blue lights were to dim to read by.

Did you remain in Kippen over the summer? Oh yes, it was an unbroken stay, except for the occasional trip to Glasgow.  Towards the end my Kippen best friend came to Byres Road with me for a week.