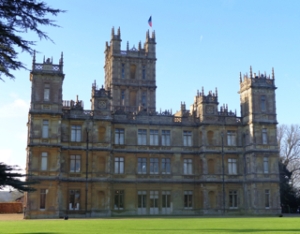 I love watching Downtown Abbey – trying to figure out where I’ve seen the outfits before – and I also love Christmas Markets. So when J called me back in October to say there was a Christmas Fair on at Highclere Castle in December, was I interested… well, of course the answer was ‘Yes’!  (I’ve just checked out the website and it looks like tickets for some spring/Easter events are already sold out, so if you’d like to visit Highclere in 2015, book your tickets asap!)

We were lucky with the weather which was cold but sunny. We took the train from Paddington to Newbury, and from there a taxi to the castle. (Taxi is approx 16GBP each way so it’s a bit pricey. There is no taxi rank at the castle for the return journey, so ensure you have a cell phone with you and get a card from the driver who takes you out there so you can call to be picked up at the end of your visit.)

The exterior of the castle and the surrounding parkland is just as stunning as it appears on the TV show. Unfortunately, you’re not allowed to take pictures inside. Also, unfortunately, the Christmas Fair was held in the downstairs rooms, so we didn’t get to see them set up as they are on TV – and they were very crowded – but we were able to view the upstairs rooms.

Was it worth it? If you’re a Downton Abbey fan, definitely. Even if you’re not, it’s a beautiful house. And if you’re a fan of Ancient Egypt, you will know that it was the fifth Earl of Carnarvon who discovered Tutenkhamun’s tomb along with Howard Carter back in the 1920s.

My one piece of advice; if you’re interested in seeing the rooms as they are portrayed in the TV show, don’t visit when there is a fair of any kind running. Save your visit until you can take your time and savour the rooms as they should be viewed.

What I love about London is you will be walking down a regular looking street and, unless you know it’s there, can be missing an absolute treasure. When doing some research for our trip this month, J and I came across a reference to Charterhouse. I was vaguely aware of it – Wasn’t it a school? – but knew absolutely no details, let alone its history. After checking out their site, we saw they offered tours so we signed up.

What we discovered was a mediaeval jewel in the heart of the busy city. Spread over six acres(!) Charterhouse is a former Carthusian monastery founded by monks from Chartreuse in France in 1371. (‘Charterhouse’ is the anglicanisation of ‘Chartreuse’.)

Following the Dissolution of the Monasteries by Henry VIII in the 1530s, many of the monks were hung at Tyburn for refusing to take an oath recognising Henry as head of the church in England, and the monastery became a possession of the crown. It was granted to Lord North, who sold it to The Duke of Norfolk, who later sold it to Thomas Sutton in 1611.

The chapel at Charterhouse where services (which can be attended by members of the public) are held.

Sutton was an extremely wealthy ‘commoner’, having made much of his money in munitions.  He turned Charterhouse into a charitable foundation to educate boys and offer residential care for single elderly men.

The cloister at Charterhouse where several rules of football were invented

Former pupils of the school – which relocated to Surrey in 1872 when it outgrew the space – include Lord Baden-Powell (founder of the Scout movement), William Makepeace Thackery (writer) and John Wesley (founder of the Methodist church).

If you’re a soccer fan, you might be interested to learn that two of the rules of the game (the offside rule and throw in) came into being on this site where the boys played the game in the cloisters.

Charterhouse continues to offer accommodation for single elderly men. Known as ‘Brothers’, they must be between 60-80 years of age and men of limited financial means. (Teachers, artists, clergymen, etc.) They live independently in their own flats in the grounds but meet together daily for meals. Although Charterhouse is an Anglican community, there is no obligation to attend services – or even be a member of The Church of England.

Note the burned door on the right hand side of the archway.

Charterhouse was damaged by bombing during World War Two. You can still see the evidence of the remnants of a burned door which protected the chapel.

Today, Charterhouse is open for tours on Tuesday/Wednesday/Thursday and alternate Saturday afternoons. They last for approximately an hour and a half and cost 10GBP per person. Tours are led by Brothers and must be booked in advance.  Please click here for the online application form. Members of the public can also attend services in their chapel. Please click here for information.

One of the many courtyards in Charterhouse. Brothers live in flats in these buildings.

Charterhouse can also be hired as wedding venue and is used quite often by film and television companies for location shooting for productions such as Downton Abbey and Great Expectations.

If you’re a history geek and/or looking for something just a little bit different during your visit to London, both J and myself highly recommend Charterhouse. With history stretching back over 700 years, it really is a jewel.

I love history. I love reading books and watching TV programmes about history. I love visiting museums, castles, stately homes, heritage parks, tenement museums. You name it, if a thing or place tells a story about the past – and particularly people who lived then – I’m in.

What is so exciting about history these days is that we’re interested not just in the lives of the ‘rich and famous’, but in those of ‘everyday folk’. Maybe that’s why we’re so drawn to TV programmes like Upstairs, Downstairs and Downton Abbey because, while we may fantasize about the aspirational, we acknowledge the ‘reality’.

And I love the fact that so many people these days are interested in their own family histories. Take last week, for example, when I received a parcel from my sister. On initial inspection, it looked like an ordinary shoebox…

… but inside was a veritable treasure trove of four generations of my own family’s history, written and created in their own hand.

My Mum’s 21st birthday cards from March 15th, 1937, including one from her then boyfriend who would become her husband, my Dad. A homemade birthday card her sister Anne – who has contributed her own wartime memories to this website – made for her.

Letters I wrote to my Mum describing our early years in Canada, postcards from a great-aunt on Mum’s side of the family, a dress and hat my grandmother (again on my Mum’s side) crocheted for one of my dollies. A Christmas card I made for my parents many – many – years ago.

It’s important we always remember that, like many things, history begins at home!

What family memories, or artifacts, do you treasure?