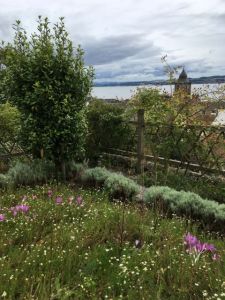 View across the Forth

Wow!  Is it really so long since I last added a post.  I guess so.

I had an amazing trip back to Scotland a few months ago.  There were many very special moments: staying in a renovated 15th century castle; a ghost tour of Edinburgh; delicious scones at all the National Trust properties we visited; visiting old castles; horse-riding along the beach; long, lazy chats with old friends; visiting family; did I mention the National Trust scones…

But perhaps the biggest highlight for me was visiting the town of Culross (pronounced q-ross), in Fife, not far from Edinburgh on the other side of the Forth.  As the guide-book says, ‘Culross is a town which time has passed by; the most complete example in Scotland today of a burgh of the 17th and 18th centuries’. 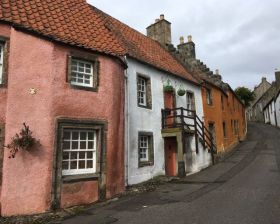 One of the old streets in Culross

Not the Mediterranean but Culross Palace courtyard.

The Mercat Cross – used in Outlander

If the town reminds you of a film set, it is, in fact, frequently used as one! If you are a fan of Diana Gabaldon’s Outlander, many of the buildings are instantly recognisable, including Geillis Duncan’s home, or the market cross where a young lad has his ear nailed to a post.

Lost in time it may be, but it is a thriving community. There’s little I can say to adequately describe what a fascinating place Culross is.  From its Palace and garden, to the Town house, Stinking Wynd (don’t worry, it doesn’t smell), Mercat Cross, House with Evil Eyes, Abbey and Abbey House, to the stunning views across the Forth, not to mention the great coffee shops, there’s something for everyone.

As a child growing up in Glasgow, late Saturday afternoon found me in front of the TV watching Doctor Who. I have to admit, I was one of those cliches – the kid hiding behind the sofa, terrified yet enthralled by these strange characters and even stranger worlds.  And don’t get me started on the Daleks.  As far as I’m concerned, they are the most frightening aliens ever invented!

I stopped watching the show around the time Jon Pertwee became the third doctor, but last weekend I plonked myself ON the sofa (rather than behind it) to enjoy the full day of celebrations for Doctor Who’s 50th anniversary.

And I had a blast. The special episode, broadcast live around the world to over 94 countries, was great, but I particularly enjoyed the interviews with cast members, past and present, as well as the drama An Adventure in Space and Time which documented the making of the show back in 1963.  Interesting that the Head Of Drama, who came up with the concept, the producer and director were all ‘outsiders’ –  a Canadian, the first female producer, and first Indian director, employed by the BBC.

Episode One – An Unearthly Child –  was broadcast the day after JFK’s assassination in Dallas. No-one expected the show to last more than one series, but here we are, 50 years later.

(An interesting tidbit for you Outlander fans out there –  Diana Gabaldon has said that Jamie Fraser was inspired by one of the Doctor’s early assistants.)

Watching that very first episode once again took me right back to my childhood.  Then, as now, the music still sends shivers up my spine.

Here are the opening scenes of that very first show.  Enjoy!

The first book in the Outlander series definitely ranks in my top ten list of favourite reads. If what you want is to lose yourself in a blockbuster story, it’s got it all; great characters, a love story, adventure, history and a little fantasy to boot. Best of all, it’s set in Scotland!

It’s taken a long time to get this to the screen. There was talk of a movie at one time, but it’s too big a story for a two-hour film. Now, probably partly due to the success of Game of Thrones, it’s just started filming in Scotland with a 2014 TV air date.

I’m excited yet nervous at the prospect, and can only hope the producers manage to realise Diana Gabaldon’s vision in the same way David Benioff and D.B. Weiss managed with G.R.R. Martin’s epic.

We’ll have to wait and see, but until then you might want to check out this website to keep up to date on the series’ progress.

Welcome to my Blog.

I write fiction with a focus on women's experiences during the Second World War and the early 20th Century Canadian West.

In 2017 I will be blogging once a week on one of my three passions: history, travel or writing.

Cooking up Wartime Recipes to Save Money & Lose 100 lbs in Weight!