One week into memories of The Great War and it’s the turn of my Grandfather on my Mum’s side. He died when I was about 3 or 4 so I don’t remember much about him. All the memories below are those of his youngest daughter – my aunt Anne who contributed her wartime memories to my wartime rationing blogs at the beginning of this year. I only have only 2 personal memories of Granddad, and they’re of him lying in bed in what, I suppose, was his sick room. He loved canaries and I do remember the sound of them chattering. I also remember that whenever I walked in the door he started singing, ‘Sugar in the morning, Sugar in the evening, Sugar at suppertime…’

Born in London, possibly Clapham, around 1878, he was the youngest son in a family of 6 girls and 4 boys. Anne doesn’t know where he got his education and training but presumes it was something to do with glass because when he couldn’t find a job in London, he found one in Glasgow, with Barr and Stroud.  My grandmother stayed in London to await the arrival of her first child, Percy Alexander Huggins, who was born in November 1912. (I think I remember Uncle Alex saying that Granddad wanted him born in England so he could play cricket for England when he grew up – but that might be a false memory.)

Part of Barr and Stroud’s production included  range finders, torpedo depth recorders, periscope range finders and binoculars, so although working in a reserved occupation, my Grandfather’s work was essential to both First and Second World Wars.

According to Anne, he was just over 6′ tall, and thin. His legs seemed to take up most of his height – a real Daddy-longlegs. They were thin too. My brother at 2 years of age always, and off his own bat, grabbed a cushion before he would sit on his Granddad’s boney thighs!

Anne has nice memories of him taking her to Kelvingrove Park in Glasgow to feed the ducks, to another park Dawesholme, which was also a bird sanctuary – he was fond of birds, especially chaffinches, and of accompanying him on fishing trips to Kilmardinny Loch – as long as she promised to keep quiet! He fished for pike (huge, vicious things) sometimes battling for half-an-hour or more. Sometimes they were too big to take home and he would hand them in to a local nursing home – the fish were big enough to feed both staff and patients.

Her wartime memories are mostly of his work during World War 2 as she was born long after The Great War ended.  As far as she can remember, during WW2 Barr and Stroud hived off some departments to what were called ‘shadow factories’ – the main building at Anniesland being too obvious a target for bombs. Anne doesn’t know how many shadow places there were, but Granddad was put in to manage one – a very large ex-garage and workshop near Kirklee.  He took her there one Sunday when it was quiet. She was in her early teens and fascinated by the equipment on all the benches and wanted to know what they all did. There were also small cubicles at one end where two people could work on tricky pieces of work.

At the back of the building there was a large area, laid down for wartime as allotments, and he quickly put his name on two of these. At 60/61 he had a garden for the first time – and what a job he made or it. He kept it going for a long time after VE Day too, since food was in short supply (after WW2) until the early 50s.

As always, when reading or listening to Anne’s stories, I wish I’d asked more questions when I was younger. It’s a lesson to us all to ask the questions of our parents and grandparents now!

August 4th, 2014 marks the 100th anniversary of the outbreak of what became known as World War One.  I never met my grandfather on my dad’s side, David Tweedie Cranstoun; he died ten years before I was born. A trained ‘dispenser’ working in a pharmacy shop in Rothesay, he joined the Royal Army Medical Corps (RAMC) in 1916, ultimately winning the Military Medal for ‘Bravery In The Field’ in 1918.

How do I know this? Not from learning stories about him when I was a child. It never occurred to me to ask questions about his life. By the time I did, all the family members who’d known him personally were dead.

But it’s easy to find out about an ex-soldier’s military record, I can hear you say. When you know their service number you can access their service records online.  What could be simpler?

And that’s true – except my grandfather’s service records were among those damaged or destroyed by the Luftwaffe in World War Two. But some fragments remain, burn marks evident around the sides.

So this is what I’ve found out about the grandfather I never knew.  He was born on May 2nd, 1887, the illegitimate son of Jane Tweedie, a domestic servant.

The fact that he was illegitimate came as a surprise. Growing up in Glasgow in the 60s, ‘that kind of thing’ didn’t happen in families like ours. And you know, I’m not sure my dad ever knew, because somewhere between 1900 an 1910,

before he married and became a father, David Tweedie changed his name to David Tweedie Cranstoun. As far as my siblings and cousins were aware, our Cranstoun great-aunts and uncles were truly our grandfather’s flesh and blood. They were always present for family celebrations and there was never a hint of ‘scandal’ about the man who – in reality – was their half-brother.

Married with three children, David joined the army in 1916, serving, as I mentioned before, in the Royal Army Medical Corps. 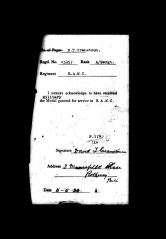 I know very little about his war. It must have been bloody and he must have seen some horrific sights. According to surviving records, he contacted measles at the front and was a patient in an isolation hospital in Glasgow for some time. And he must have done something very brave to win the Military Medal in 1918.

I also know that after he was demobbed from the army in 1920 he couldn’t settle. According to my father, my grandfather found it hard to adjust to everyday civilian life and signed up to fight for the ‘White Russians’ following the Bolshevik Revolution in 1921.

Today, 100 years on from the beginning of that bloody First World War, I can’t help thinking of David Tweedie Cranstoun and all the sons, brothers, fathers, sisters, daughters and mothers who served in that conflict at enormous emotional and physical cost to themselves and their families.

We owe them all so much.

I love history. I love reading books and watching TV programmes about history. I love visiting museums, castles, stately homes, heritage parks, tenement museums. You name it, if a thing or place tells a story about the past – and particularly people who lived then – I’m in.

What is so exciting about history these days is that we’re interested not just in the lives of the ‘rich and famous’, but in those of ‘everyday folk’. Maybe that’s why we’re so drawn to TV programmes like Upstairs, Downstairs and Downton Abbey because, while we may fantasize about the aspirational, we acknowledge the ‘reality’.

And I love the fact that so many people these days are interested in their own family histories. Take last week, for example, when I received a parcel from my sister. On initial inspection, it looked like an ordinary shoebox… 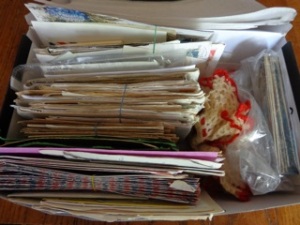 … but inside was a veritable treasure trove of four generations of my own family’s history, written and created in their own hand.

My Mum’s 21st birthday cards from March 15th, 1937, including one from her then boyfriend who would become her husband, my Dad. A homemade birthday card her sister Anne – who has contributed her own wartime memories to this website – made for her. 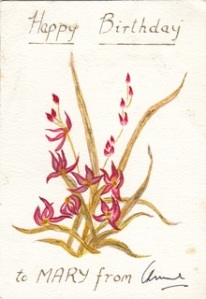 Letters I wrote to my Mum describing our early years in Canada, postcards from a great-aunt on Mum’s side of the family, a dress and hat my grandmother (again on my Mum’s side) crocheted for one of my dollies. A Christmas card I made for my parents many – many – years ago. 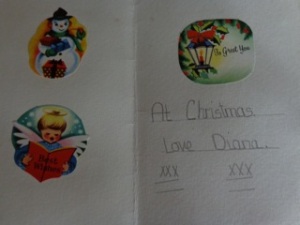 It’s important we always remember that, like many things, history begins at home!

What family memories, or artifacts, do you treasure?