A wee bit of a cheat day today.  Just because it was wartime didn’t mean that you couldn’t visit a restaurant for a meal or tea room for a cuppa.  Today I had a meeting at a well-known coffee-house, so I’m claiming my small latte and piece of lemon cake as my ‘wartime afternoon tea’. 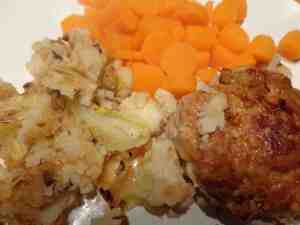 For dinner, I made some of my homemade lentil/vegetable soup. That was followed by  bubble and squeak – mashed potatoes mixed with cabbage and onion fried in leftover bacon dripping – to accompany a sausage meat burger. I wasn’t too thrilled with the latter, but my husband enjoyed it – think he was just grateful for a decent quantity of meat! Carrots added some colour to the plate – wartime meals are a bit drab looking – and of course we ended with pudding.  You’ve guessed it, pear crumble.  With only apple and pear in season in January in the UK, it had to be one or the other.  Next week I must try to be a little more adventurous!

Today’s cinema questions for Anne were: How often did you and the family go to the pictures?  Any little tidbits you remember?

Me? Whenever I could raise the cash. I don’t remember dad ever going but he seemed strangely pro-Barbara Stanwyk. Mother loved the Jeanette MacDonald romantic musicals and would not miss anything with Greer Garson or Irene Dunne in it.  I usually went with her because she paid!

Re the tidbits… Don’t forget the magical appearance of the organ rising in front of the curtain in the interval – only in the posh cinemas in town. Also that, for your money, you got what was called ‘the big picture’, plus another not-so-good full-length film, plus newsreel, cartoon, another short – a travelogue for instance, or Pathe Pictorial. The programme cycled from about 2pm till 10/10.30 and you could, in theory, stay there for 8+ hours.

My husband wasn’t exactly thrilled at the idea when I asked him to join me in my second week of eating wartime rations, but give him credit, he’s agreed to play along.  It helped, I think, that I told him he could ‘pretend to eat at the Savoy’ every lunchtime when he was at work and rationing would be limited to meals at home.  Still, he was a bit anxious when he walked through the door this evening to discover what his rations would be. Homemade burger, bubble and squeak, mashed carrots, followed by apple crumble. 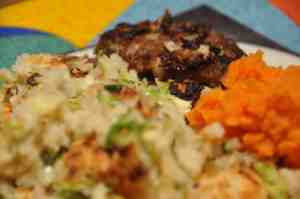 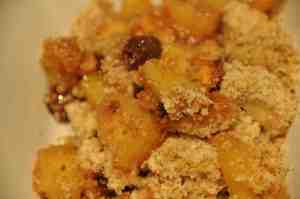 Phew.  Relief.  He finished all his main course  – “I don’t remember my mum ever making bubble and squeak”  – and asked for seconds of the pudding.  (And there’s still some left over for my lunch tomorrow.)

When I did my food shopping for the week this morning, I discovered two things: 1) my bill was a fraction of the usual weekly cost. 2) I only shopped the ‘perimeter’, which is the healthiest way to shop.

The one thing that put my bill up was the meat for one of my dogs.  He’s very elderly (15) and reluctant to eat anything now unless it’s homemade. (He’s eating the equivalent of all my meat rations – and then some – in one day!)  It got me to wondering what happened to pets during the war.  When I did some research, it made for some very sobering reading. Over four hundred thousand dogs and cats were euthanized in the first few days of World War 2.

Humans aren’t the only ones to make sacrifices during wartime. If you’re ever in London, check out the Animal War Memorial in Park Lane close to the junction of Oxford Street and Bayswater Road. It’s a very moving tribute to those proud, beautiful animals. 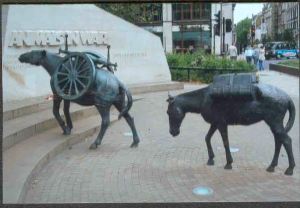 To lighten the mood, and given my husband is lunching at ‘the Savoy’ all week, here’s an ‘eating out’ memory from Anne:

Restaurants were still open and supplied meals, but the plates were not well filled and if you didn’t get there early you would find most things scored off the menu, and were left with some sort of ‘savoury pie’ of mixed veg and herbs with a few breadcrumbs scattered over the top.  Then there were the ‘British Restaurants’ set up by the Ministry of Food; I never ate in one but the word went round that the meals were barely acceptable. Fish & Chip shops got a quota of fish and queues formed well before they opened; after it had been sold there were only a few sausages (mostly of bread) or meat-or-fish-cakes of dubious content.  After that it was chips with nothing.  The shops sometimes didn’t open at all – days when there was no fish on the market.  Fishing could only be done in near coastal waters and they didn’t always manage to catch anything.

I was still at school in 1939 and when I was evacuated the school was many miles away so I had to eat in the school canteen – not very inspiring.  I can remember macaroni cheese without much cheese and being many times faced with a plateful of mash alongside a small piece of Cheddar and some over-boiled cabbage, often followed by semolina with a dab of jam in the middle.  But we ate it all.

Britain declared war on Germany on September 3rd, 1939.  Although that declaration was followed by fighting in Norway and U-boat attacks on British ships in the Atlantic, so little happened for the next few months, that people in the UK started referring to it as The Bore War.

That all changed on Friday, May 10th 1940.  At 2am, the Germans invaded the Low Countries.  Three weeks later their grip on mainland Europe became absolute when the last soldiers of the British Expeditionary Force – including my dad – were evacuated from the beaches of Dunkirk.   It would be four long years before the British Army set foot on French soil again.

In 2009 I walked the 22 kilometre length of the Dunkirk beach with a friend. Unknowingly at the time, I took this photo of his dog tags very close to the spot where he actually stepped out on to the sands. 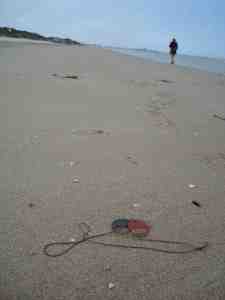 Getting back to my rations today.  No surprises when I tell you I had porridge for breakfast, eh?  Lunch was leftover Woolton Pie from last night with some Bubble and Squeak.  And then, treat of all treats – I had a piece of chocolate this afternoon.  My sweet ration is 3ozs of sweets/chocolate a week and I can’t tell you how wonderful that one single ounce of chocolate tasted.

Dinner was Beef Hot Pot and Beetroot (I’m really getting to like beetroot) followed by Apple and Rhubarb Crumble. Filling and tasty. 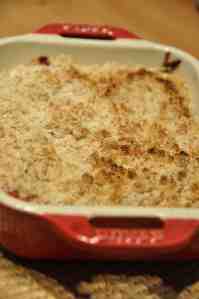 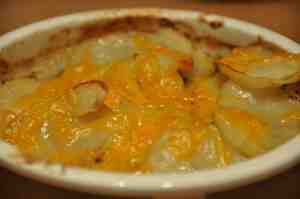 A friend was telling me about how her father, who grew up in the countryside on the Isle of Wight during the war, was able to eat an egg for breakfast every day. When he got married and moved to the mainland, he was quite upset to discover his ration was now down to one egg per week – if they were even available.   When I mentioned this to Anne, she told me the following story.  I’ve never heard it before, and I think it’s a classic.

About the man from the IoW and his eggs – Yes, I’m sure that country folk fared better than us townies.  It isn’t easy to raise chickens in a city tenement, or to pot a rabbit or a pheasant with a shotgun.  Once when I was wandering alongside a stream in Kippen I came across a shot pheasant, dead but still warm, grabbed it and hid it under my coat till I got back to the house.  Mary (my mum) said she had no idea how to start preparing it so I’d better get on the bus to Glasgow and take it home.  Once there, I got the job of stripping off the feathers and then Mum, Dad & I had a good meal.  Took some of the best feathers back to Kippen to play cowboys and Indians.

I am neither the best cook in the world nor a particularly organised person.  Put the two together and…  I’m beginning to feel like the girl on Youtube’s My Drunk Kitchen, only without the ‘drunk’ bit.

1) I carefully measured out all my meat rations on Sunday morning and put them in the freezer. I needed one single piece of bacon for tonight’s liver, but it was frozen solid in a block of two.  Ah well, at least I had enough dripping for the Bubble and Squeak.

2) Dessert tonight was supposed to be rhubarb crumble. In deference to my health, I’d decided to go with margarine made with olive oil rather than animal marg or lard.  Weellllll… you can’t make crumble with that kind of marg,  so it was stewed rhubarb for dessert instead.  I’m going to have to exchange my rations at Safeway tomorrow.

3) I put the liver bake in the oven and forgot to set the timer.  Duh!

Anyway, I survived and this was tonight’s menu.

Liver Bake, (liver, onions, apple, bacon, seasoning), Bubble and Squeak (mashed potatoes, cabbage, spring onions, and Carrots.  The liver actually tasted much better than I expected  and I can see myself making this again in the future. As for the Bubble and Squeak – I could LIVE on this.  It was wonderful! 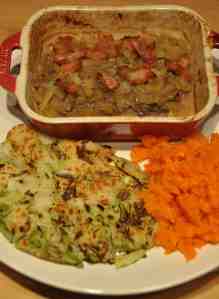 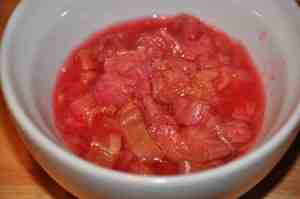 Stewed Rhubarb.  I haven’t had this in years and it was delicious.  As soon as I took my first spoonful it brought back memories of the rhubarb sponges my mum used to make when I was young.

So that’s Day 1 done. This is probably the healthiest I have eaten in a long – long – time, and I’m feeling very satisfied.  Day 2, here I come, but before that, a final thought from Anne.

Everything outside the staples, incl. tinned foods, biscuits, dried fruit, coffee etc needed coupons called ‘Points’ and you could choose what to use them for, but again, a tin of apricots would make deep inroads into your allocation of Points, while a tin of meat or fish would probably use a month’s allocation.  In theory you could spend Points in any shop, but were likely to be met with,  ‘Sorry, registered customers only.’