Although I’m tending to have the same for breakfast and lunch every day – porridge, soup, sandwich/salad and fruit – I’m trying not to repeat evening meals.  At least the main course. So far I’ve been fairly successful. 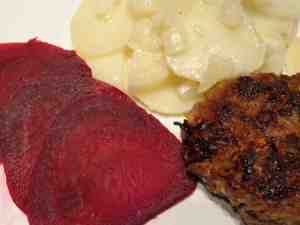 This evening (bracketed by soup and bread-and-butter-pudding) we enjoyed a homemade hamburger – 2 oz of minced beef from our 8 oz rations – mixed with breadcrumbs, chopped onion, seasoning and a little HP sauce to pull it all together. Along with that I made fresh beetroot and stoved potatoes (potatoes, onion, milk, seasoning, butter). I’ve never made the latter before, but they are almost identical to scalloped potatoes, only made in a pot on top of the stove instead of the oven. Fast, easy and tasted really good.

Following Anne’s mention yesterday of the Americans arriving in the UK, I received a question asking more about her memories of that time.

Can’t remember much about it. I suppose the main influx of US troops arrived sometime in 1942, but I would have been in Kippen, I think, for most of the time that forces were building up in Britain towards D-day. There were no US troops in Kippen! By the time I went back to Byres Road I was aware of them, of course, wandering in twos and threes around the city. I have the feeling they were mostly new arrivals or ‘on leave’. At least one of the big hotels, at Charing Cross, had been taken over as a residential US Army club, and most were to be seen around that area. I was still very young – about 13/15 – ages in those days still regarded as ‘children’* innocent of the world, and I gave them little thought.

*As somebody so rightly said, ‘The past is a foreign country – they do things differently there’. Certainly we were allowed to be children’ for much longer.

There had been severe warnings from Mother of course, but about soldiers in general, with US ones regarded as more dangerous because they had so much more money! So I was steered clear of them.

But I’ve found a BBC article which gives a lot of info, so try that. The article’s title is ‘How the GI influx shaped Britain’s view of Americans‘.

There’s also a great film called ‘Yanks’ which is worth checking out. This isn’t the best clip from it, but it’s the only one I could find on Youtube.