If you’ve ever seen the movies Love Actually, Goldeneye, Sherlock Holmes, The Duchess, Shanghai Knights or Last Chance Harvey (amongst others) then you’ve caught a glimpse of Somerset House, just off The Strand, in London. Known by many (of a certain generation) as Register House, it was, until fairly recently, where official hatch, match and dispatch certificates were filed. (Birth, marriage, death.)

The first building in this location was a Tudor Palace, and it remained a royal palace for many years, housing three queens, including Catherine of Braganza, the wife of Charles II. Extended over the years, it fell into disrepair and was demolished in 1770 to be replaced by the present Somerset House, designed by architect Sir William Chambers, and built to house the Headquarters for Offices of State, especially the Navy and Taxation.

With official departments being moved out at the end of the 20th century, much of the building was opened up for public use. Somerset House now hosts the Courtauld Gallery, shops, cafeteria, museum, concerts, summer fountains and winter skating. (For winter skating, it’s advisable to book tickets in advance as many dates/times quickly sell out in advance.)

During the Christmas Season, the famous Piccadilly store Fortnum and Mason takes over one of the ground floor wings to provide a beautiful shopping arcade. Fortnum and Mason was founded in 1707 by footman William Fortnum who sold candles made from wax stubs left over from the Royal Household. Over the years F&M became famous for their travelling food baskets, and sent over 10,000 Christmas puddings to the Western Front every year during WW1.

Part of the tour of Somerset House.

Tours of various parts of the building that are normally closed to the public take place on Tuesdays at 12.45 and 14.15. Tickets are only available in person on the day and cannot be booked beforehand. For more information, please click here.

When Somerset House was built, the Thames was much wider – there was no Embankment – so boats sailed right up to Somerset House. Nowadays there is a small museum where the boats docked, with audio-visual displays depicting the evolution of the buildings on that site from earliest times to present day. 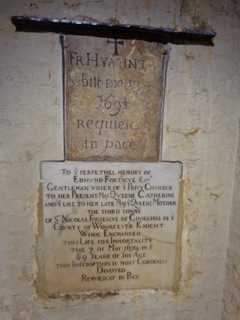 Given that this was once a royal palace with a chapel (and graveyard), there are still some memorial stones to those who were buried within its grounds. One in particular caught my eye, the date of death being 1691/2.  I’ve seen that before on old gravestones and never quite understood why. How can you have 1/2 or 5/6 or 8/9 as the last number on a date? The answer is to do with the changeover from the Julian to Gregorian calendar, with the last two numbers reflecting the date according to both calendars. (The Gregorian calendar, which more accurately reflected the solar year, was introduced into some European countries in 1582. Canada, the US and the UK adopted it in 1752 with Turkey being the last to introduce it in 1927.)