If I ever win the lottery (mind you, I’d have to start buying tickets first!) I’m going to buy myself a house in Hampstead and walk my dog on Hampstead Heath every day!

This park of 790 acres (with its own police force) is, according to the guide book, less than 6km from Trafalgar Square and just within Zone 2 on the Northern Line.

I adore London, but, even so, the crowds and traffic can sometimes become rather suffocating. Even in the city parks it’s hard to get away from The Madding Crowd. In contrast, I found few tourists walking the heath; most walkers were locals out with their dogs. (The downside of this is that once you’re actually on the heath, there are no signposts.) 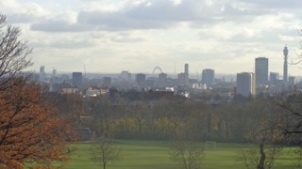 The view of London from Parliament Hill.

A quick google search revealed that Hampstead Heath has been used as a location on over 50 movies and TV shows – including Notting Hill, The Omen, 101 Dalmatians and Mansfield Park – so it’s possible you’ve seen it on-screen before. Especially the view from Parliament Hill overlooking London. And that was my goal.

“Which way to Parliament Hill?” I asked one of the underground personnel when I arrived at Hampstead Tube Station.

“Turn right and go up the hill,” he said.

Which is what I did.

And got totally lost.

Moral of the story? Just because someone works in a location, doesn’t mean they know the area. 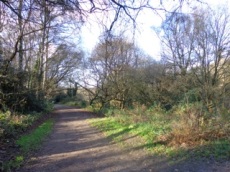 The opposite direction to Parliament Hill!

When I found myself inside the park going downhill through a tangled path of trees, I cottoned on that I was probably heading in the wrong direction. About a hundred yards away I saw a man walking his dogs. I reckoned he was bound to know the area. “I know you,” the voice in my head said as I drew closer. “I definitely know you,” it repeated when he started to speak. And then I gave an Oscar-winning performance of my own, pretending not to recognise the Downton Abbey actor, as he pointed me in the right direction!  Turns out there are two heaths – west and east – and I was on the wrong one. 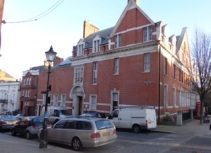 Downshire Hill. Turn left here and follow the road all the way down to the park entrance.

I’d also hoped to visit a few of the museums in Hampstead – Kenwood House, Burgh Museum, John Keats’ House and 2 Willow Road – but none were open that day. (Second moral to the story – always check museum opening times in advance.) But after a fabulous walk across the heath, I enjoyed a leisurely stroll back along the main street.

Despite its village feel, Hampstead boasts some of the most expensive houses in London.It was great just doing a bit of window shopping – apparently Judi Dench has been known to shop for clothes at The Hampstead Bazaar just opposite the tube station – and I stopped in for a lovely cup of tea and scone in one of its tea rooms. 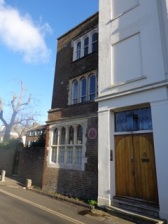 I’m definitely going to revisit Hampstead on my next trip to London – striding out across the parkland after being hemmed in by people and traffic was a real joy – but this time I’ll take my own advice and check out the museum opening hours ahead of time.