I know, I know.  I can just imagine you looking at the blog post title, throwing up your arms in despair and saying, “She’s talking about graves. Again!’  But this is the last time, I promise. At least from Union Cemetery. (I still have to take the tours of Burnsland and St Mary’s cemeteries.) 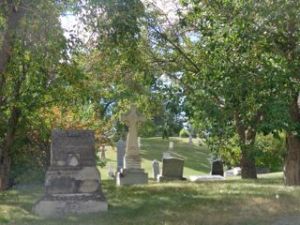 Although not all of the people buried in Union Cemetery have grave markers, they all have a story. As a writer, here are a few of the stories I learned on the cemetery tour which – while not about the great and the good – really piqued my interest.

The first I found really touching – because I pass by this place every day when I walk my dog – was the story of a young engaged couple who were killed on the corner of Prospect Ave and 10th Street SW. Apparently he went to pick up his fiancée, who lived in a rooming house on Prospect Ave, to go for a walk one day. Mount Royal is – not surprisingly given its name – on a hill. When they were caught in a thunderstorm, a bolt of lightning ended their lives. Their grave is unmarked and their story leaves me with so many unanswered questions. What were their names? Where did they come from? What ages were they? What were their dreams? How soon did they plan to marry? What were their occupations? Such a tragic loss. 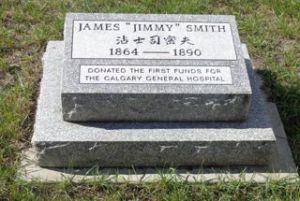 I love the story of Jimmy Smith who emigrated to Calgary from China. Determined to become ‘Canadian’, he dressed in western clothes and was known only by his ‘English’ name. A cook at the Grand Hotel in Calgary, he died of TB but left $1,500 to go towards the building of Calgary’s first hospital, the Calgary General Hospital. His marker was provided by both the Nurses Union of Alberta and the Chinese Community of Calgary. What was his ‘real Chinese name?’ someone on the tour asked. A couple who spoke Chinese looked at the  Chinese characters and smiled.  ‘Jimmy Smith,’ they  replied.

I’ve talked about Peter Prince – a lumber merchant from Quebec – before in my blog. His house can be found at Heritage Park and his office still serves as a restaurant – 1886 Cafe – in Eau Claire. After Prince’s first wife Marguerite died of diabetes (he is buried alongside her in St Mary’s Cemetery) he married three more times. Hmmm, I can hear you thinking. Sounds a bit dodgy. But remember, those were different times. You could not have a single woman in your home unless you were married to her. He married Emma – who had been a invalid for some time – who died in 1902. His third wife, Rosa, died of cancer in 1907. Emily, his fourth wife, outlived him by 19 years. Her grave is unmarked, but she is buried with Rosa and Emily in Union Cemetery.

There are so many other graves and so many stories: Sam Livingstone who brought fruit trees to Alberta and fed the NWMP through their first hard winter in Calgary; Maude Riley, who made a pact with God after she almost died in childbirth, brought in laws to protect children and is commemorated by Riley Park; Fred Collings, a runner for the telegraph office, who died when he and another boy were cleaning their revolvers. Thinking the chambers empty, they fought a ‘duel’.

What a rich and colourful tapestry. 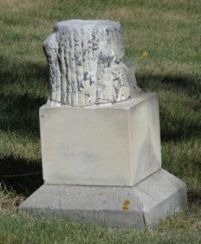 I learned other things about the symbols to be found in graveyards. We know that children are often represented by lambs or little shoes, but a grave marked by a tree stump also represents a life cut short.

What about an anchor? – The symbol of faith.

Or what about this grave? Given the name and lack of dates… what story does it conceal? 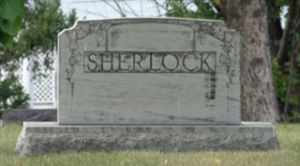