We are such stuff as dreams are made on; and our little life is rounded with a sleep.

I’ve always found this quote by Shakespeare both inspiring and comforting, so it was wonderful to hear it spoken aloud yesterday evening at Theatre Calgary’s production of The Tempest, performed in an outdoor setting amongst the trees of Prince’s Island Park.

Shakespeare By The Bow – formerly Shakespeare In The Park – is a quarter-of-a-century old Calgary tradition, giving newly graduated drama students the opportunity to practise their skills under the direction of a professional theatre company.

And flex those acting muscles they certainly did last night, with performances that were energetic, funny, thoughtful, considered and assured. 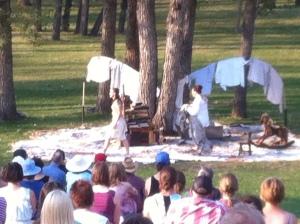 With a female Prospera replacing the traditional male Prospero, the setting was perfect and the costumes inspired. The audience captured all ages. (And species! I spied a few dogs there too.) Many audience members had come prepared with blankets, deck chairs and picnic baskets, while others, cyclists and joggers out for a run, or families out for an evening stroll, stopped to take in the entertainment.

This is the final week for Shakespeare By The Bow  – it ends on Sunday 16th – and I highly recommend taking a trip down to Prince’s Island Park to catch one of their final performances.  Please check out Theatre Calgary’s website for further information.