Rightly described as Edinburgh’s Best Kept Secret, Gilmerton Cove is the place to visit if you’re a fan of mysteries. Hidden beneath an unprepossessing cottage on Gilmerton’s main road, historians and archeologists still don’t know for sure when this network of secret passages was built, or even what they were used for.

The entrance to Gilmerton Cove

Discovered almost 300 years ago, George Patterson, the local blacksmith, claimed he had hand carved the tunnels – in which he and his family lived – by himself, over a five-year period.  But could one man, on his own, really carve such an intricate series of ‘rooms’ out of bedrock using simple hand-tools?

Is that the ghost of a previous occupant at the end of the tunnel… or just a trick of light?

If so, why dig a well that doesn’t reach water? Why build a forge that has never been used? Were the tunnels really built as a home, or do they harbour older, darker, secrets? Were they used by Covenanters rebelling against the king?  A coven of witches?  A Hellfire Club? Smugglers distilling illegal whisky? 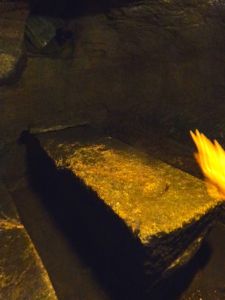 Is it possible they were built by the Knights Templar as a place of religious reflection?  How about the Romans? It’s up to you to come to your own conclusions. 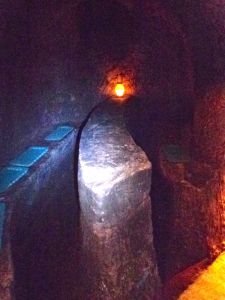 Who gathered here and why? To study? Pray? Drink?

And afterwards, while you’re in the area, consider driving a further ten minutes up the road to explore the mysteries of Rosslyn Chapel.