Having completed one week of eating wartime rations, this evening is an opportunity to work out what I’ve done right, what I’ve done wrong, and plan for the upcoming week.

What I’ve done right? Despite many temptations, I’ve stuck to my rations. (We went to the cinema today and nary a piece of popcorn passed my lips!) I’ve eaten more healthily in the past week than I have for a while, and although I slipped a bit vegetable-wise today – it’s been a bit bread/potato heavy –  one day out of seven isn’t bad. This evening I got a bit of a ‘fat’ craving, so finished up my meat ration with a side order of chips. Making chips at home during the war became more difficult as fat rations were limited, but fish and chip suppers were still available at the local chippie or restaurant. 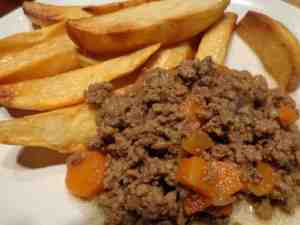 What I’ve done wrong? Because I wasn’t sure how to make the rations stretch for the week, I ended up not actually eating them all.  I’ve been left with 2 pints milk, one powdered egg, about 5 ozs fat and most of my sugar.  Good news in a way because it means I can add those rations to next week, but bad because the rations were carefully designed for health, so I really should get that milk, egg and butter in to me!

The plan for the upcoming week? I had underestimated just how much time cooking everything from scratch would take –  even though I’ve cheated a couple of times, microwaving a baked potato for example – so I’ve been a bit sparse adding Anne’s comments and what was going on in the war to my daily postings.  As from tomorrow, that will change!

One observation about something we take for granted that must have been so different during the war. Driving home from the other side of Calgary this evening, we crested a hill and saw the city spread out in front of us, thousands upon thousands of lights glittering in the dark. Sky scrapers sparkled and traffic lights blinked red and green in the night. It was stunningly beautiful. And as I sit here writing this in my study, I have my blinds open and can watch car headlights swing around corners, enjoy the Christmas lights still twinkling across the road, and marvel at the misty waxing moon rising in the sky. If this had been wartime, I would have had to go outside to look at the moon, and beautiful though the moon is, I find there’s something magical about city lights and the thousands of lives they reflect.

In the British wartime blackout, all that life would have been hidden. And frightened, waiting for the bombs to fall.

How fortunate I am.