Our ‘staycation’ is over and I was surprised by how many experiences/challenges we were able to closely replicate here in Calgary. For a city a fraction of the size of London, Calgary has a lot going for it. Still, there were two things in particular that I wasn’t able to replace, so they will have to wait until we manage the ‘real thing’.

Challenge 9 – A visit to the Herge Museum (Tintin) in Brussels. I searched around for some collectible shops which might specialise in Tintin ephermera but was unsuccessful. An option was to buy my husband some Tintin books (which I did) and watch the Tintin movie again (which we didn’t), but hopefully we’ll manage to get to Brussels next year.

Challenge 10 – We’d also hoped to visit The Harry Potter Studio Tour in London. As it turns out, there is a visiting Harry Potter Exhibition in Edmonton at the moment which would have fulfilled that particular challenge perfectly. Unfortunately we’ve had a lot of snow and bad weather here over the past few weeks and I didn’t fancy driving on the highway just for that. However, the exhibition is running until March 9th, so we might still manage to get up there.

Challenge 11 – It’s hard to visit Belgium or Northern France without taking in war museums or military graveyards. I discovered there is a cemetery here – Burnsland – which has many veterans graves from both World Wars. I had hoped to visit it this morning, but weather and events conspired again me, so it will have to wait for another day.  But I did wonder why we have so many veterans graves in a country that never experienced war on its soil?  The WW1 veterans were, I think, those who died back home in Canada of their injuries or from the Spanish flu. As for the WW2 veterans?  Sadly many of them were pilots and air crew, killed while training in the British Commonwealth Air Training Scheme.

In general, I would say our stay-cation was a great success. We saw many things which we didn’t know existed in the city and have a long list of things still to see and do. But the biggest lesson? No matter where one lives in the world, it’s easy to forget just how much your home town has to offer. No, we didn’t get to see the canals in Bruges this year, but when I’m out driving on Calgary’s roads, I just have to look to the west and an amazing vista of the Rockies – that thousands of tourists, some probably from Bruges and London, flock to see –  fills the horizon. 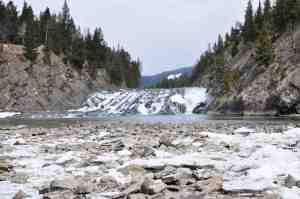 As for Calgary’s downtown… walking along the river, watching it steam as it ices up has to be a truly beautiful sight. 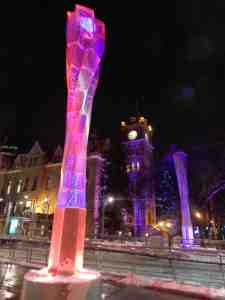 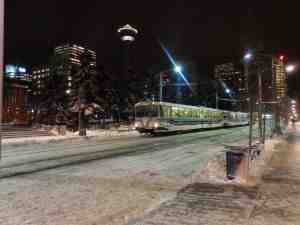