It’s absolutely bucketing with rain here in Calgary today, but when the weather is dry, one of my favourite places to visit – and a ‘must’ if you’re visiting the city in summer – is Heritage Park. When we moved to Calgary I worked as a docent in the Park telling schoolchildren tales of the pioneer days. It was a wonderful way to learn and experience the history of this land. I even had the good fortune to meet the daughter of an early pioneer.  She was in her 80s at the time, and she and her family had moved to Alberta in the early part of the century from Chicago.  Her father had gone on ahead to build a house for the family who followed on several weeks later.  When they arrived, she recalled her mother just sat in the wagon for hours and sobbed.  They’d left a house with beautiful furniture and stained glass windows to live in a ‘soddie’, similar to the one in the photo below. Those early pioneers certainly had grit. 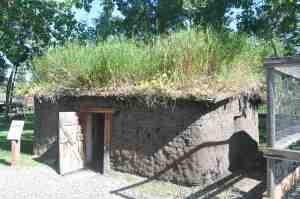 There is so much to do and see here that you really need to spend the whole day in the park.  And there is something for everyone; original houses filled with history and stories, train and steam boats rides, an old fashioned fairground and lots of shops selling everything from little nick-nacks to gingerbread men and old fashioned candies.

Another absolute city gem – which most Calgarians aren’t even aware of – is the Cantos Music Foundation. Situated in a red brick downtown office building, it holds a treasure house of keyboard instruments, some dating back almost 400 years.

The picture above is only part of an old 1920s cinema organ. In the early days of silent films, the organist wasn’t just responsible for providing the musical accompaniment, but also for creating the necessary sound effects, and that’s what you can see lining the wall behind the organ. Absolutely fascinating. 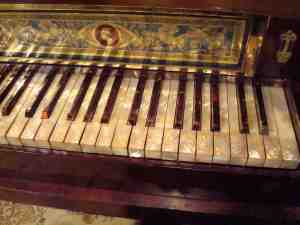 The museum offers everything from harpsichords to the latest electronic keyboards. Sitting amongst all these beauties is the simple white upright piano on which Elton John wrote ‘Your Song’. On his last tour through Calgary he made a special visit to the museum to play on it once more.

As I said, an absolute treasure house for anyone interested in music.