Another winner! My son didn’t have time to go home for dinner tonight between work and going to his night class, so I invited him over to share our rations. “It’ll be okay,” I assured him, but I’m not sure he was convinced.  Fortunately the three course dinner was a hit. 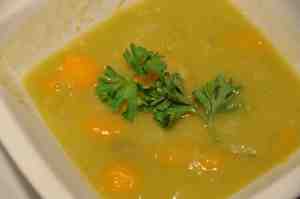 We started with vegetable soup made with dried peas instead of my usual lentils, followed by sausages, baked potato with butter, carrot/parsnip mash and raw broccoli. (My husband won’t eat green vegetables if they’ve been cooked.)

Sausages weren’t rationed during the war, but their meat content was very low with most of the filler being bread.

For pudding I decided on Bread Pudding and it was delicious.  I got the recipe from The 1940s  Experiment.com website.  If you haven’t checked it out yet, please do. There is so much fascinating content to be found there.

I haven’t been at all hungry on my rations.  In fact, I forgot to eat lunch today because I was still full from a late-ish breakfast of porridge and toast. But I can’t pretend I’m really experiencing what it must have been like during the war. Even though a food might be on the ration – eg eggs – if there weren’t any to be had, you did without. Sometimes the shortage lasted one week, often more. In that case it was make do and mend, and in that case, as Anne comments below, mothers usually denied themselves for their families.

Mothers, I am sure, became thinner before anyone else, though children and expectant mums got extra milk, vitamins and some rather horrid concentrated orange juice; sometimes there were eggs for ‘blue books only’. (Blue covers denoted children’s ration books.)

Soap and washing powders were rationed too. That wasn’t a problem to us in Glasgow. With its wonderfully soft water the ration was more than enough; in fact Mother used to send unused soap coupons to her family in the hard water areas of the Midlands who were finding the allocation too small.

Welcome to my Blog.

I write fiction with a focus on women's experiences during the Second World War and the early 20th Century Canadian West.

In 2017 I will be blogging once a week on one of my three passions: history, travel or writing.

Cooking up Wartime Recipes to Save Money & Lose 100 lbs in Weight!