Dinner tonight (after my usual breakfast and lunch) was Woolton Pie.  Trust me, an hour ago, things weren’t looking good on the cooking front.  I’ve never been great at making pastry, so attempting potato pastry for the first time… Let’s just say, I think it will take a bit of practice. 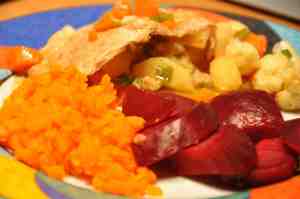 But then, when I actually sat down to eat, things improved.  I certainly can’t complain about being hungry eating wartime rations.  In fact, I couldn’t finish my meal tonight, not because it tasted bad  –  despite how it looked, it ended up being pretty good after all – but because there was so much of it.

Britain faced several hard years of austerity after the war when even bread and potatoes became rationed, but after that, slowly  – slowly – things started to improve, although it wasn’t until July 4th, 1954 that rationing finally ended.  Fourteen years of rationing. Hard to imagine.

Which got me wondering when rationing ended in France and Germany, so I checked it out on Wikipedia: France in October 1945 and in Germany in 1950!  Can you imagine how galling that news must have for the British population. The Daily Mail newspaper commented, ‘Germany – the battered, shattered, defeated Germany – is to abolish rationing… Austrian shops are bulging with goods that the women of victorious Britain would like to see.’

I married in the summer of 1947 and found myself with a kitchen when rationing was still quite severe.  At the butchers’, the butcher chose for you: he delivered a half pound of mince on Tuesday and two not very large lamb chops on Friday, and that was it for the week.  Rob came along in October 1948, but Blue Book rations had gone up a bit by the time he started having a little solid food – starting with fruit at about 3 months.  I can’t remember whether or not tins of prepared baby foods were available then or not, all I know is that I spent hours shoving fruit and veg through a fine strainer.

If you have any family stories of wartime rationing, please send them to me.  I would love to hear them.