The second part of my surprise day was pretty special.  A few years ago, when J and I were last in the UK, we watched a documentary called History Cold Case on the BBC  (watch it HERE) where historians and forensic investigators attempt to solve the riddle of skeletons found in unusual places. (The Windy Pits episode is truly creepy!)

Having recovered the bones of a young woman from a communal grave in Cross Bones Graveyard in Borough, the investigative team then tried to figure out who she was and reconstructed her face.  The investigation into her sad life was fascinating, but seeing her ‘come to life’ was incredible.

It turns out that back in the day, the Bishop of Winchester gave licences to prostitutes and brothels to allow them to operate – the prostitutes actually being known as Winchester Geese.  However, when they died, the church was no longer interested in them and their bodies casually disposed of in Cross Bones Graveyard. 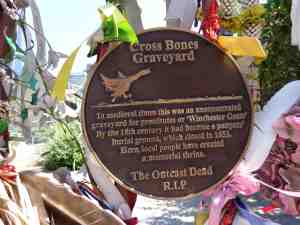 Nowadays, on the 23rd of each month, a memorial service is held to commemorate their lives. In remembrance, ribbons, flowers and trinkets are attached the the iron gates of the now disused graveyard. 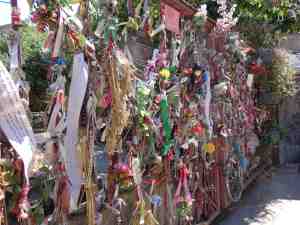 A fascinating story and very unusual memorial.  Cross Bones Graveyard is definitely worth a visit if you ever find yourself in the Southwark/Borough Market area in London.